No gigs for the foreseeable future: the Gilligans

- Sophie, Patrick and Martha - are concentrating on

Look out for the new project from Kevin and Richard:

6 November 15, University of York St John's - Recording session for "Whatya gonna do with your CO2"

2 May 2014, "Instrumental" at the Inkwell, Chapel Allerton, Leeds (Benefit gig)

8 May 2012, "Goodbye Rocky" Video webcast to Stockholm, and SEI centres round the world

Spring 2011: Intensive rehearsing as the new band build up a set of covers and original material. Kev "deps" with Mahogany Monkey at a St Patrick's night gig - the first time all four of Eclectic Sparks appear on stage together.

December: Kevin rehearses with Richard, and then with Sophie and Patrick. (Their first time playing together: 8 December 2010.) The four of them gel immediately, and this line-up becomes the quartet Eclectic Sparks.

November: Richard looks for a rhythm guitarist to augment the trio so he can play lead mandolin. He "discovers" the experienced and highly talented Kevin Hicks, a colleague working a few rooms away at the Stockholm Environment Institute in York, who fits the bill perfectly and is keen to get back to playing after a long break. Kevin is also a singer and "frontman" and brings several of his own songs to the group.

October: Richard, Patrick and Sophie perform an "interval set" as a trio at Mahogany Monkey gig playing some of the more jazz/rock songs that Richard has been writing during the year. Goes down well.

Richard, Patrick and Sophie play together as members of Mahogany Monkey, a six-piece folk-rock band. 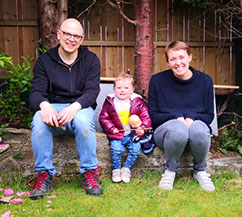